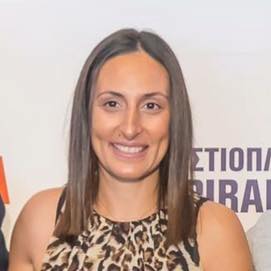 As an active athlete and Bronze Olympic Medalist in Sailing (Beijing 2008) my life has been dedicated completely to sports, my studies and my contribution to the Hellenic Youth Society until now. As much as I am enjoying working and competing as an athlete, I recognized at first hand before 8 years the price athletes must pay to have professional career. Unfortunately, I also see nowadays many athletes and youth who are routinely misguided by competent bodies (clubs, federations, Sports and Education Ministries). Seeing these misfortunes inspired me to get involved, learn and act to improve this issue. My background allows me to understand the needs of Youth and armed with a passion for sports I possess energy, enthusiasm and effectiveness to those who want to compete and succeed in all facets of their life.

University of Peloponnese, Department of Sport Organization and Management of Olympic Events

University of Sciences and Sports

2013 Worked for 4 months as Physical Educator/Olympian in the “Kids Athletics” Olympic educational program organized in cooperation with the Ministry of Education Lifelong Learning and Religious Affairs, Hellenic Olympic Committee and the Hellenic Athletics Federation, under the auspices of the IOC

2008- today My current position is in the Ministry of Education Lifelong Learning and Religious Affairs, at Directorate of Physical Education where I worked for 2 years as Secretariat Staff

In recently years I am collaborating with different organizations such as the Hellenic Olympic Academy ,the International Olympic Truce Center ,the Association of Olympians Participants, the Association of Hellenic Olympic
Winners, Olympic Museum in North Greece, Universities and others to promote sports, healthy way of living, culture and education based on values of effort and persistence for a better life. Although, I am trying to support any extracurricular physical activity according to the principles of the Olympic Idea and the educational value of sport in shaping the personalities of Youth in the conditions of modern life that we all experience

Participation in many social and environmental activities around Greece

Volunteer in Sailing Event at “Athens 2004” Olympic Games, as assistant staff inside the course area and assistant counter

Volunteerin Special School of Blind people with regular visits.Starting on September 2014 the implementation of a special program through my sport to learn about differentskills

Presented the subject of “What an athlete can offer to the contemporary society?” at the Youth European Session 2014 organized by Azerbaijan/Ministry of Sports and International Olympic Academy